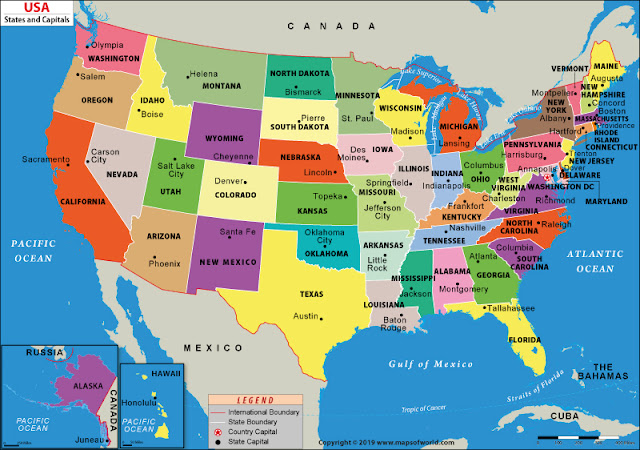 The United States is a large country whose states vary on political and economical views, geographical positions, natural resources, and many other aspects that affect the overall wealth of a state.

The Census Bureau’s American Community Survey has allowed us to rank the richest US states according to the median household income, it is fascinating how different areas from the same country work and how wealth is associated with other necessary characteristics of a region such as education.

Washington households make an average income of $66,174 and the state has a poverty rate of 11%. The Northwestern state has the largest number of STEM workers in the entire country and follows the state of California and having the most patents filed. On top of its clear a high number of scientific and technological businesses.

Washington also has no state tax forming high incomes for residents. However, despite the benefits, the state has to offer. It also has one of the highest unemployability rates in the entire country at 4.6%.

The median household income in California is $67,169. Home to the country’s film and tech industries. California has the world’s densest concentration of high tech companies in its Silicon Valley area.

The state also exports lots of goods such as dairy products, vegetables, grapes, almonds, and cattle. Fun fact if California was a country, it would be the country with the sixth-largest economy in the entire world.

an annual household income of $66,866. Virginia’s adults are the most likely of the nation to hold at least a bachelor’s degree making them so much more qualified for high paying jobs and increasing the possibility of a long lasting successful career. The bedroom community in Washington, Virginia State has a large number of government employees and contractors, many of whom commute to Washington DC daily. Virginia’s unemployability rate is also lower than the national average at 2.8%.

New Hampshire residents annually make $71,305 this bedroom community of Boston has one of the highest economic securities among the nation states and one of the lowest percentages of poverty in the country at 7.7%. And if all that wasn’t enough, New Hampshire also has a very low unemployability rate at two and a half percent. The state’s economy benefits from its leading industries which are manufacturing, health care, and tourism.

Connecticut has the 3rd highest number of millionaire households in the country, the median household average is $73,781 annually, and the owners of these households are more likely than any other state to work in lucrative career fields such as finance and information. The state is known for its broad range of manufacturing industries ranging from the production of submarines to metalworking.

the island households average at an income of $74,923 and are among the least likely households to be impoverished in the nation. Despite Hawaii’s economy working differently than the rest of the country. Due to its expensive shipping and consumer prices. It still manages to have one of the lowest numbers of unemployed workers and the highest median home values in the entire country at 616,000. While all of that is great, it also means that Hawaii’s living costs are pricey. The state’s wealth is attributed to two main factors defense and tourism. Hawaii is known for being a great vacation spot. But what many don’t know is that several of the US Department workers are housed across the island.

famous for its technology and business schools. Massachusetts is the most educated state with the highest percentage of bachelor degree holders in the country, making the adults of the state more equipped for high paying jobs. Hence the state’s median household income of $74,167. Other than being home to some of the world’s top universities like Harvard and MIT further resources like financial services, technology, medicine, and even tourism are all strong agents to the state’s economy.

The state with the highest population density in the country has an average median household income of $76,114 40% of New Jersey’s adults have a bachelor’s degree allowing them to work high paying jobs in the state specialist leading industries like biopharmaceuticals transportation And manufacturing. Also, there are more than a few Wall Street millionaires who reside in New Jersey all reasons as to why New Jersey households have higher chances of being wealthy more than any other state.

The median household income of Alaska is also $76,114. The state’s economy is driven by its oil reserves, fishing of wild seafood, like salmon, and tourism. In fact, Alaska actually attracts around 1.1 million tourists every year. The state also has a universal guaranteed income, helping increase spendings and economic growth. But despite all that, Alaska has some of the highest unemployability rates in the country at around 6%.

The richest state in the United States, Maryland, with an annual household income averaging $78,916. Maryland is the nation’s wealthiest state. The state benefits from being close to Washington DC were many of Maryland’s residents being employed by the public administrator center. In fact, one out of 10 residents work in the public administration sector. Besides, the state’s economy also highly profits from its technology, aerospace, and defense industries.

Most of us hope to earn large amounts of money to be able to provide luxurious lifestyles for our families. So living in and benefiting from the richest areas of the nation might sound like an easy way to get lots of money coming your way.

But these areas also have drawbacks, such as costly living expenses and home prices. Don’t move somewhere just because of some numbers wisely pick the right home for yourself based on your own desires and career decisions in life.

What is a Unicorn Company?